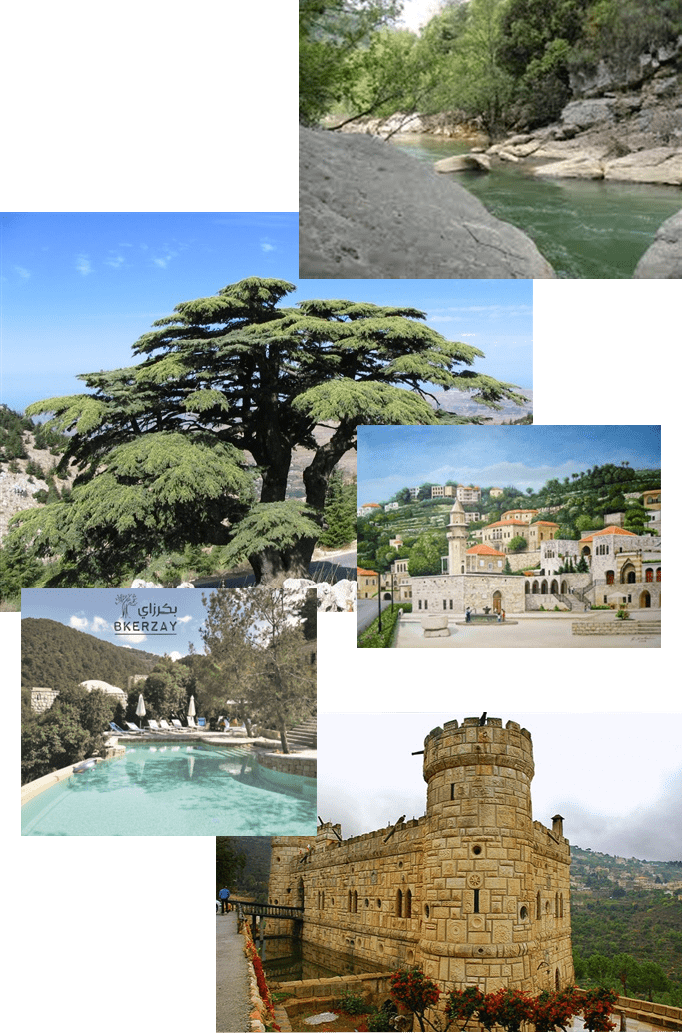 The Shouf Biosphere Reserve is the largest natural cedar reserve in Lebanon.
Mission
A world class Biosphere Reserve where natural and cultural heritage are conserved, resources are treated as wealth, investment receives due care, and development is controlled by citizens, businesses, and the managing authority.
Awards
Arab league Award for Sustainable development – 2010
Michel Batisse Award – 2011
Takreem Award for the sustainable management of the Environment – 2012
Description
The largest of Lebanon nature reserves, Al-Shouf Cedar Nature Reserve stretches from Dahr Al-Baidar in the north to Niha Mountain in the south. Blanketed with oak forests on its northeastern slopes and juniper and oak forests on its southeastern slopes the reserve’s most famous attractions are its three magnificent cedar forests of Maasser Al-Shouf , Barouk and Ain Zhalta – Bmohary. These Cedar forests account for a quarter of the remaining cedar forests in Lebanon, and some trees are estimated to be 2,000 years old. The size of the reserve makes it a good location for the conservation of medium size mammals such as the wolf and the Lebanese jungle cat, as well as various species of mountain plants.
The Al-Shouf Cedar Nature Reserve is a popular destination for hiking and trekking, with trails matching all levels of fitness. Bird watching, mountain biking and snowshoeing are also popular. From the summit of the rugged mountains, visitors will have a panoramic view of the countryside, eastward to the Beqa’a Valley and Qaraoun Lake, and westward toward the Mediterranean.
The cedar forests of Lebanon enjoy the unique distinction as the oldest documented forests in history. The cedars were featured prominently in the earliest written records of the Sumerians dating from the third millennium BC. The Epic of Gilgamesh describes the cedar forests of Lebanon as being “one thousand leagues long and one thousand leagues wide”.

Bkerzay is a conservation project which aims to preserve the natural beauty, traditional crafts, and vernacular architecture of the region. Located in the heart of the Chouf, Bkerzay is the perfect place to reconnect with nature and take a break from urban life.

Bkerzay’s Guesthouses are suitable for families, couples, nature lovers, or special events. They were meticulously built without removing a single tree, using traditional Lebanese stone architecture that blends into the landscape. The interiors are furnished with vintage pieces in an effort to reduce waste and celebrate rustic design. Spending a night in Bkerzay gives you access to the infinity swimming pool, common areas, and a lavish breakfast at the Bkerzay restaurant.

Bkerzay’s Pottery studio and classes to encourage local craftsmanship and reinforce the connection between man and soil.

Bkerzay’s Hammam offers an unforgettable rejuvenation experience under its majestic dome and with a breathtaking view from the terrace.

The Eco Village is an organically grown project in Dmit Valley, Chouf. It was created for educational ecotourism where they help find harmony with nature while enjoying a multiple range of activities. From mudhuts, tree houses, green roofs, free range goats that you can watch get milked for some fresh and delicious cheese that you get to eat for breakfast to chickens, edible wild flowers that taste like kiwi, lemon trees, orange trees, wild asparagus, and so much more, everything on the entire farm is organic and all the buildings are made from recycled material. Visitors are welcome to come for as long as they wish in the clay, bamboo or tree houses. It is also possible to stay in a tent within the pine trees if one feels like it. There is an organic vegetarian restaurant on the site where food comes right from the organic farm certified by IMC (Instituto Mediterraneo di Certificazione) and a beautiful mountain river to be enjoyed as well.

Line for outside description:
A sustainable project of a village in the Shouf mountains, Dmit Valley.
30
Min from Beiteddine Palace

Deir El Qamar is a Lebanese town known as the Capital of Emirs. From its palaces, Lebanon was governed from the 16th century until the 18th century. People from all religious backgrounds lived in peace, explaining the existence of a mosque and a synagogue in addition to Christian churches in the town. In the year 1860, Deir El Qamar was destroyed during the conflict between Druze and Christians during which the town was set ablaze. The original name, Dar Al Qamar, was changed to Deir El Qamar after the 1860 conflict. Historically, its population was mainly Druze, the Al-Nakad family. Today, 85% of Deir El Qamar inhabitants are Maronites and 14% are Greek Catholics.

According to his biography, as a student, Moussa has always dreamed of building such a castle, and used to doodle his dream on pieces of paper in class. Moussa was not a very sharp student and his teacher Anwar[2] used to make fun of him and tell him: “You’ll never accomplish anything.” Moussa’s crush, a Lebanese girl, used to say that she wants to marry a guy who owns a palace. Between 1951 and 1962, he prepared everything to fulfill his plan, including buying the land and paper work.[3] In 1962, his work of life started: He built the castle and handcrafted each of its stones and clay animated figures representing different scenes of the old Lebanese village life of the 19th century,[4] making it a true work of a visionary and a masterpiece by all means.

Emir Bashir II of the Shihab dynasty, who later became the ruler of the Mount Lebanon Emirate, built the palace between 1788 and 1818 at the site of the Druze hermitage. After 1840, the palace was used by the Ottomans as a government building. During the French Mandate it served as a local administrative office.

Baakleen National Library occupies a historic building that goes back to 1897, known then as “Baakleen Saray”, comprising a court, a prison, and a post of the gendarmerie.

Barouk village is the birthplace of the composer of our national anthem: Rachid Nakhle.